From September 30 – October 3, 2017, I hiked the Sioux-Hustler Trail with four friends. It was an exceptionally rainy period on top of an already-exceptionally-wet season, so our experience was not average.

The “Little SHT” has some easy aspects: it’s relatively flat, with gentle terrain and very few opportunities to get lost. There are also challenges: lots of mud, no bridges, and no way to bail out. 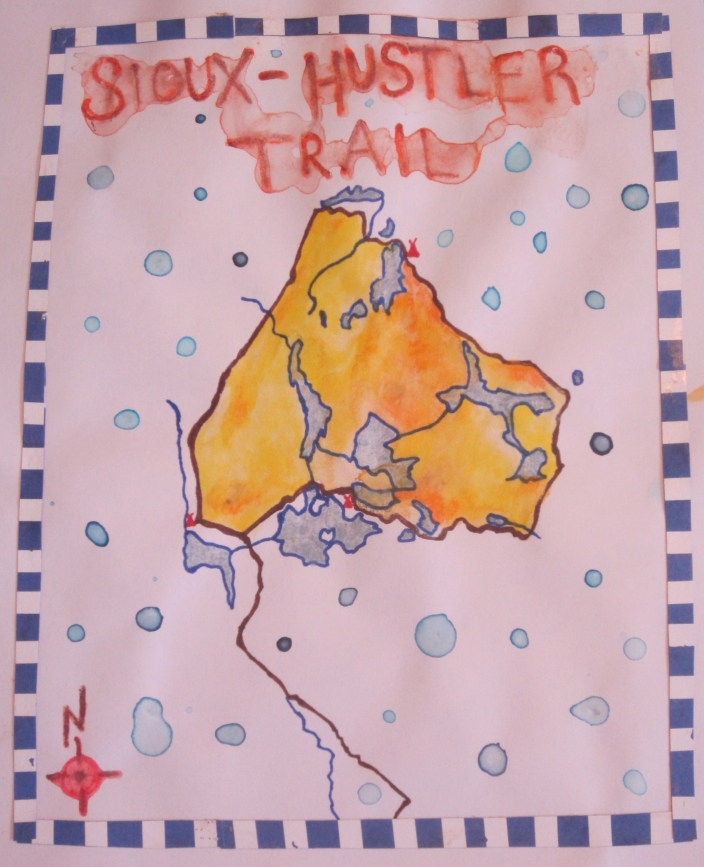 After a week of being sick, it hurt to groan back into action. But I was glad to have rebounded enough to tag along on this journey. I wanted to hike this trail ever since I heard of it.

My friend Roberta picked me up at 7:30AM and we drove to Ely and up the Echo Trail to the trailhead where we met Zach, Mark, and Monte. The five of us were ready to explore this trail.

We took our first sit-down break at Elm Portage where the river cascades down rapids. A perfect lunch location. 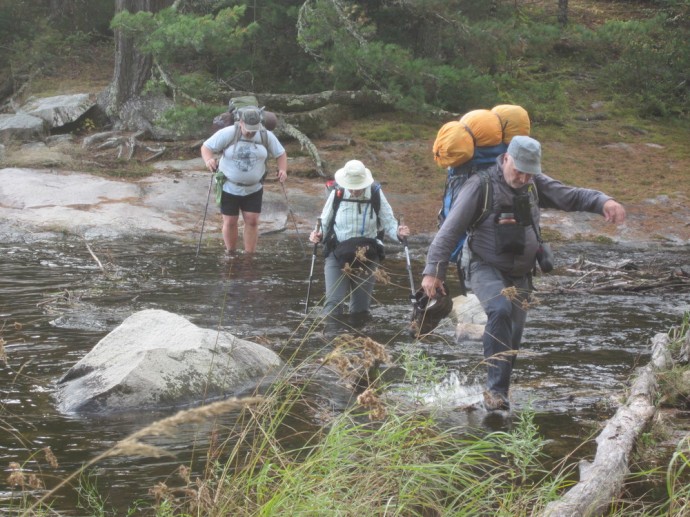 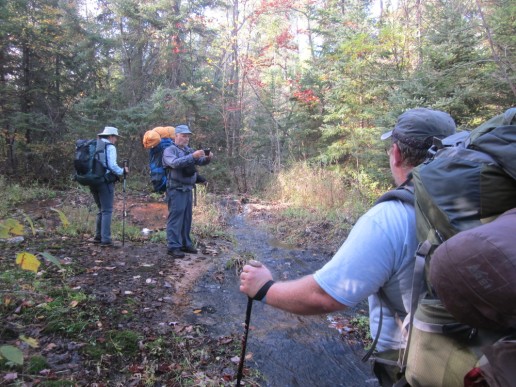 The Sioux-Hustler is a “lollipop loop” – it has a “stem” of about six miles before the loop part of the hike begins. We chose to hike counter-clockwise due to campsite placement. But before we reached our first campsite on Shell Lake, we had a knee-deep ford to tackle. We weren’t sure where the trail went, so we spent a little time looking around and sure enough, the ford was necessary.

There was someone already at Shell Lake, but there was nowhere else to go, so we shared the site. They were also hiking the Sioux-Hustler Trail, but heading clockwise.

Today was long but could have been so much worse. The rain was persistent in the morning but didn’t last all day.

We didn’t get going until after 9AM, which is a challenge for me — my best hiking hours are between 6-9AM, so by the time we started, my energy was already fading. The joy of hiking with other people: laughter, safety, inside jokes, but a communal schedule. So it goes.

The trail was slow-going – lots of blowdowns that our hero Monte tackled. We stopped for lunch near a rock peak prior to Shohola Lake. After lunch the group moved faster, and one of the portage intersections snuck up on me, which was a good sign. 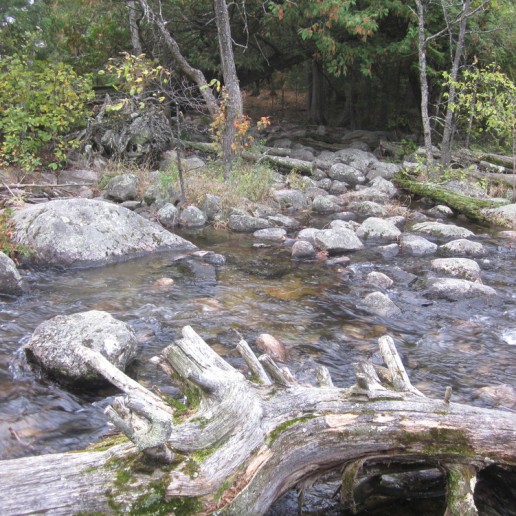 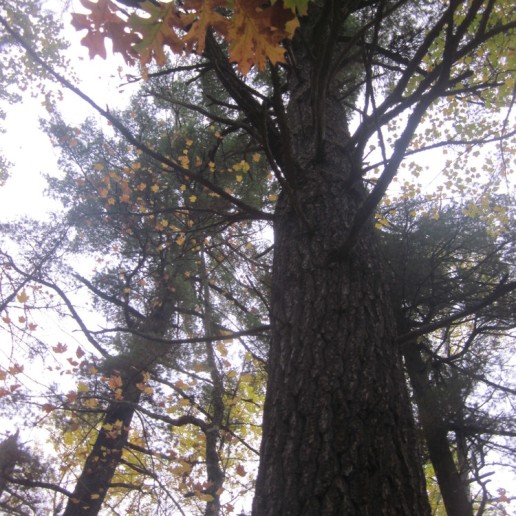 Due to campsite placement, we kept going a little farther than we wanted to. The next day’s forecast wasn’t great, so it felt better to push on today even if we didn’t want to. That made good sense when I said it, but made less sense when I fell through a beaver dam. I ripped my socks to shreds but miraculously didn’t draw blood. I could easily have broken my ankle or foot. I screamed, but only from surprise.

The big let-down of the day was the Three Sentinels, which has become the 2.5 Sentinels. These three trees are a landmark on the trail, but they aren’t particularly noteworthy, especially now that one of them bit it.

At last we made it to Rangeline Lake Campsite, which has no portage route into it, so it’s used exclusively by hikers. We had the site to ourselves and enjoyed watching the night fall on this beautiful place.

It began to rain in the middle of the night and didn’t seem inclined to stop. It was a long, cold night.

I woke up to a red squirrel chucking pinecones at my tent — on purpose. Vindictive little bastard.

The first mile and a half to Pageant Lake were cold, rainy, and miserable, but after that the rain tapered off. The trail also leveled out, and the beaver dam crossings were more stable than what I encountered yesterday.

Mark sped ahead today; I was second in the dispersed line. I deeply enjoyed the time alone; my mind sorted through all kinds of topics. For a 3.5 mile stretch of trail, I didn’t even have to crawl underneath anything — a record on the Sioux-Hustler! 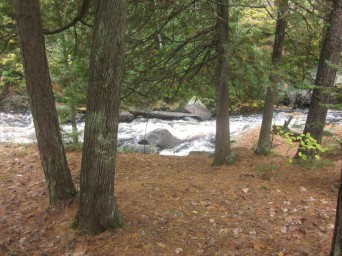 We set up at Devil’s Cascade Campsite, perched high above the Cascades. Monte and I walked down to the water and found a weird octagonal rock with holes in it — clearly man-made, but why? I am fascinated by the history of the Boundary Waters. There is lost civilization out here for those who know where to look. Someday the majority of the world may look like this.

We awoke to more rain. My tent’s rainfly was plastered with fallen leaves.

The guys hadn’t woken up yet, so Roberta and I packed up and took off on our own. It was too cold to linger, and there were burgers in Ely just waiting to be eaten.

It was a quick jaunt to the Y intersection where we had turned to hike counter-clockwise. Now we just had the stem part of the lollipop loop left. 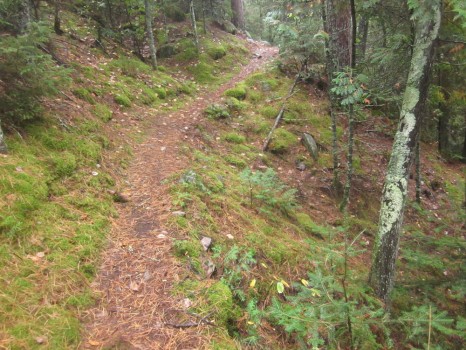 The trail was basically a creek now and enticed us to not stop often, though we did stop at the cascades where we initially ate lunch. It’s a good spot to rest. Then we quickly carried on and reached Roberta’s car happy and excited. We changed our clothes and proceeded immediately to The Boathouse.

I’m glad I did the Sioux-Hustler. I’m glad it’s over. Maybe next time I will go when it’s not raining.

On a BWCA kick? Check out: